Interview Huawei founder Ren Zhengfei: „5G is like a nuclear bomb for the US“

Is Huawei a danger to the West? Huawei founder and CEO Ren Zhengfei rejects US allegations, calls for tax cuts in China, and warns of a new Cold War.
21.04.2019 - 10:09 Uhr Kommentieren
Jetzt teilen

Shenzhen Shenzhen. For months, world leaders have been discussing the use of Chinese telecoms technology and its associated risks. Now Huawei's founder Ren Zhengfei is speaking out and harshly criticizes the US. „Unfortunately, the US sees 5G as a strategic weapon. For them, it's kind of a 'nuclear bomb',“ said Ren Zhengfei in an interview with Handelsblatt and Wirtschaftswoche.

Ren even warned against a new Cold War. Especially the „American trade war“ could lead to a more radical and less balanced world. If the West does not want such a conflict, „it needs to stay open and accept the rise of other countries“, said the head of the Chinese telecommunications company. But the Chinese CEO also expressed admiration for the policies of the US president. „President Donald Trump is great because he cut tax rates in such a short period of time - in a democracy no less.“ He said that he hoped for substantial tax reductions in China, too.

Regarding the spy allegations, Ren offered to sign a „no-spy agreement“ with the German government in order to ameliorate Berlin's security concerns. Germany is currently holding an auction of 5G spectrum. The EU recently expressed that, in principle, it remains open to using Chinese technology in the roll out of their 5G mobile networks.

The US in particular had recently called on the European countries to exclude Huawei. They claim that that the company could use its telecoms products to monitor or compromise networks. So far, no evidence has been made available to prove these accusations. Huawei has repeatedly denied these allegations.

Read the full interview below:

You recently praised Donald Trump as a great president because of his economic policy. Shouldn’t he be your worst enemy?
Businesses worldwide suffer from a heavy burden. If this burden doesn’t get relieved, businesses will have no breathing space. President Donald Trump is great because he cut tax rates in such a short period of time - in a democracy no less. 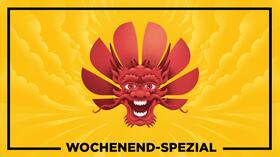 Are you saying that Trump is a role model for the world?
His purpose should be to attract foreign investment. But if he keeps intimidating other countries and foreign businesses, then they won’t want to invest in the US, and hence his tax cut policy will be much less effective. In fact, I hope that China will substantially reduce its heavy tax burdens.

President Trump has been trying to intimidate Huawei. The US has been trying to persuade its allies, Germany included, to no longer employ Huawei technology or to at least reintroduce security checks. Has the US boycott against Huawei already affected your business?
No, it hasn’t. Our business grew by 30.6% year-on-year in the first quarter of 2019 and profits grew by 35.4%. Therefore, I would like to thank all those US politicians who have called on others to boycot us around the world.

Why?
The US actions so far have not actually helped them achieve their goals. In fact, it's done the opposite. The current debate has made people think: Has the US ever been afraid of anyone? So why are they currently afraid of Huawei, a little rabbit? This 'little rabbit' must be making some really good products.

So the US are running ads for Huawei... In your opinion, why do the US take action against Huawei?
Unfortunately, the US sees 5G as a strategic weapon. For them, it's kind of a „nuclear bomb“. But this is not the case. In my opinion, our technology is more like a water tap from which the data packets go into circulation, meaning into the network. The 5G water tap is simply bigger and wider than the 4G one.

You make 5G technology sound so harmless...
Had the US not been so fixated on 5G, then it wouldn’t have developed so fast. In

fact, before the US started making such 5G into such a big deal, I personally was a bit concerned for its future. At the time, I thought the pace of 5G research was too fast and that many commercial applications didn’t require 5G yet.

Do you think the action of the US has been politically motivated, because they fear for their technological supremacy?
Yes, the US doesn’t want to be overtaken. Even though the industry that we are in is not that important, they still don't want to see us outperforming US companies. They want to suppress us.

Is Huawei possibly the most prominent victim of the US-China trade war?
I wouldn’t say it like that. We’ve always had virtually no sales in the US market. So the only impact we might be seeing right now is taking place in other Western countries that have a good relationship with the US.

But hasn't your reputation also been damaged? After the warnings from the US government, confidence in Huawei technology has diminished worldwide.
Our customers, including those from the West, have been building their trust in us over the past 30 years. That trust isn't going to go away just because a few influential people say something. While the whole world is paying attention to this topic, we should take a step back and ask: what contributions has Huawei made to society as a whole.

Do you have any examples of this?
Huawei has contributed about 90.000 patents worldwide. Those are all new patents related to network technology. Second, not only have we connected three billion people around the world, we have also facilitated connections between all sorts of business sector like for example the finance industry. Huawei’s disappearance would be a threat to the world.

Donald Trump fears that China is emerging as a superpower that is contesting America’s status as the world’s number one. Is this perhaps more than „just“ a trade war. Is the world possibly faced with a new Cold War?
I worry about that. The American trade war is making the world more radical and less balanced. Some Western countries like to take sides on certain issues. If China and Russia were to start doing the same, then another Cold War could come about again, indeed. 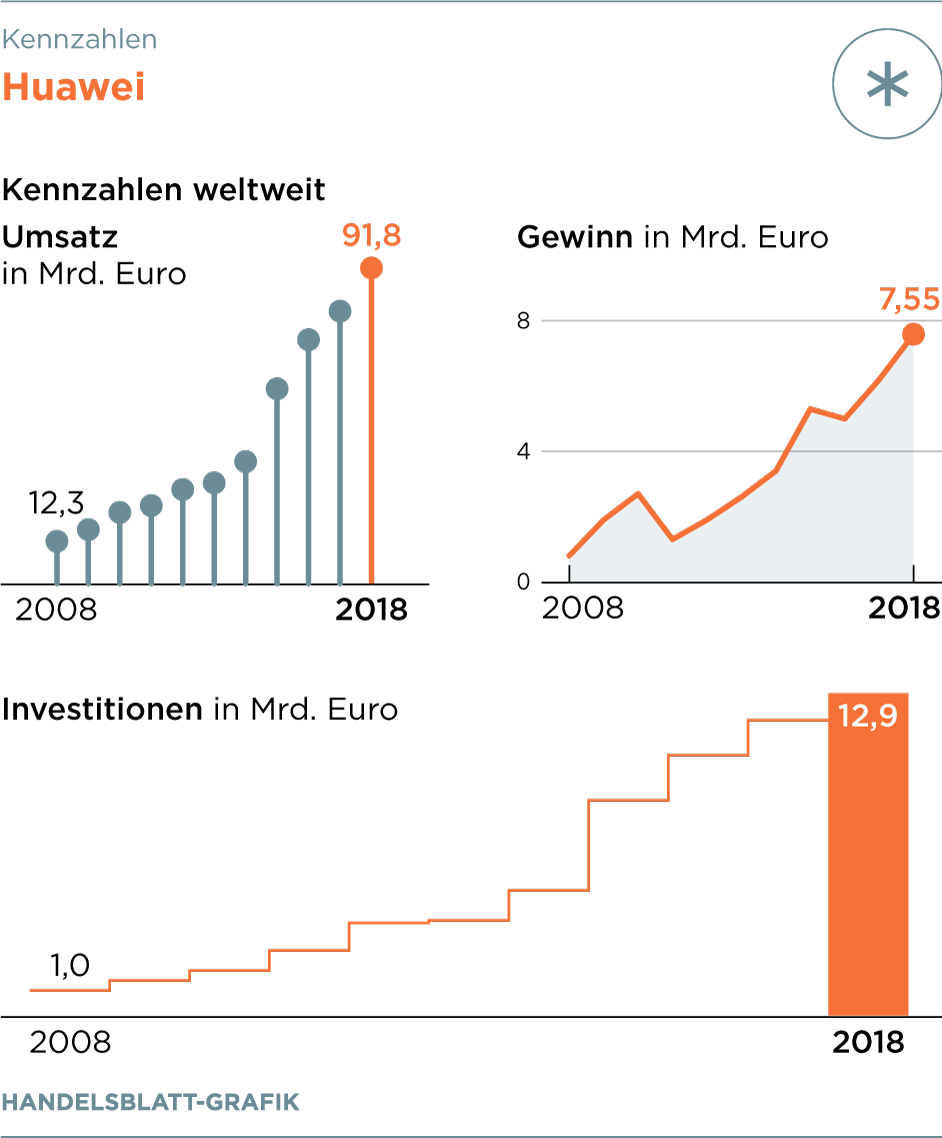 How can this be prevented?
If the West doesn’t want another Cold War, then they need to stay open and accept the rise of other countries. We should put our focus back on economic development and make peace. If, for example, Europe were to increase its trade with other countries, then the trade volume could grow by maybe 1 trillion US dollars. There would be less conflict. Also, European countries would have more income that could help them address some of their internal problems.

But the US government and the EU have accused China of not being open enough. Many sectors are closed off to foreign investors.
China has been opening up more and more every day already. According to the Foreign Investment Law that was just approved by the National People's Congress in March, German enterprises, including machinery and car manufacturers, can set up fully-owned businesses in China. That could expand the potential market for German businesses while reducing their costs. And it would bring Germany even more economic prosperity.

But if a new Cold War were to come about, then the world economy would suffer, as would companies like Huawei, Daimler, Siemens etc. Do you fear a new era of protectionism in the world?
I don't think a new wave of protectionism will last for a long time. Large Western companies, not us, are the ones who are the most concerned about protectionism. Their balance sheet and stock prices would suffer and their market would be hit hard if they couldn’t sell their products to China's 1.3 billion people.

Research and innovation could also be affected...
Indeed. Some small innovative companies have been developing cutting-edge products. If the US prohibits them to sell their products to China, they can either move to China or to Germany. No company can survive they they cannot sell their products.

A Cold War also has intelligence operations. Chinese law states that companies have to provide assistance in cases that are related to national security. How do you deal with that?
At the Munich Security Conference, State Councilor Yang Jiechi made it very clear that Chinese companies have to abide by the laws and regulations of the countries in which they operate. There is no Chinese law that requires companies to install backdoors or spy on foreign entities. Premier Li Keqiang also reiterated this message at the latest session of the National People's Congress. Hasn't the Chinese government stated their stance clearly enough?

Ren was born in 1944 as the oldest of seven children in the South-Chinese province of Guizhou. Just shortly before the Cultural Revolution Ren was able become an architecture student at the university of Chongqing in 1963 while self-teaching himself engineering through books. In 1947 he became a technician in the People's Liberation Army. He was then allowed to join the communist party in 1978, before trying to make it as a businessman.

Huawei was founded by the then 43-year-old in 1987 in Shenzen as an import-company for network parts from Hongkong to the main land. After a couple of years Ren started to invest in the development of his own gadgetry. Huawei was profiting from a governement program at that time, that supported the re-establishment of local networks. Today Huawei employs 180.000 people around the world, 40 percent of which are working in research and development.

Have you never installed backdoors in your equipment?
If Huawei had ever acted maliciously, like implanting a backdoor in our equipment, in any country, then we would have risked losing our markets in over 170 countries. All our employees could lose their jobs. That would be worth than death for me. Therefore, how could I possibly agree to installing backdoors?

So what the Americans are talking about is just a fairy tale? It's not true?
Certainly a fairy tale.

But it's a fact that Huawei employees stole technology. In 2014, Huawei had to pay a fine of millions of US dollars to T-Mobile, the subsidiary of Deutsche Telekom, because two of its engineers were using the arm of a test robot.
Just as we take the protection of our own intellectual property rights seriously, we also fully respect others' intellectual property rights.

Has Huawei not engaged in industrial espionage?
There have been isolated cases where individual employees have failed to comply with company policies. After all, Huawei has over 180,000 employees. Those who violate company rules will be disciplined. Our success can be mainly attributed to our focus on our own research, which has taken us ahead of our competitors. This is why the US is coming after us.

Do you trust US tech companies like Google, Amazon, and Facebook in terms of data security?
Complete security is virtually impossible to achieve in all technologies. The costs would be enormous if we attempted to build an information network that guarded against absolutely every risk. Our networks are supposed to guard only against hostile competitors and malicious attackers. We have no hostile competitors amongst Western companies, so we don't guard against Western companies. We also don't guard against the US government, the German government, the Chinese government, or any other government. They will not forward information about us to our competitors.