Valley Voice Why we need more women on the tech stage

Maybe the number of female speakers is no reasonable criterion for a tech conference. But here's what happened recently at CES in Las Vegas. 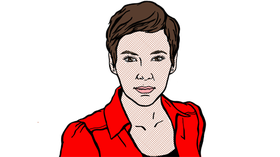 Be provocative in San Francisco – and you risk social condemnation. Even if people are of a certain opinion they would never speak it out loud. Everybody is so politically correct, gender conscious and home before 9pm. There are days I want my money back.

But how strange was going to Las Vegas for the Consumer Electronics Show (CES), one of the biggest conferences in the tech industry. Vegas, baby, that’s a world of easy money and gambling addicts, of permanent entertainment, where the waitresses’ age indicates the quality of the hotel.

I remembered that when I was five, I asked my father why there were all the half-naked women in the carmakers ads. “It’s because men think they will also get the blonde lady if they buy the car”, he answered. I thought that was a pretty good deal.

Some people also seem to believe that. At CES, half-naked women were all over the place: next to autonomous cars or virtual reality headsets, robots or smartwatches. Interestingly enough some of these companies sell thousands of devices a month – how do they manage to ship all the women?

What I want to say is this: Maybe political correctness will drive us crazy. And maybe it is hilarious to think the number of female speakers is the most important thing about a tech conference. But we definitely need more women on stage than – for example – next to it.