Good afternoon, everybody. Please be seated. It is a great honor to return to the National Defense University. Here, at Fort McNair, Americans have served in uniform since 1791 -- standing guard in the earliest days of the Republic, and contemplating the future of warfare here in the 21st century.

For over two centuries, the United States has been bound together by founding documents that defined who we are as Americans, and served as our compass through every type of change. Matters of war and peace are no different. Americans are deeply ambivalent about war, but having fought for our independence, we know a price must be paid for freedom. From the Civil War to our struggle against fascism, on through the long twilight struggle of the Cold War, battlefields have changed and technology has evolved. But our commitment to constitutional principles has weathered every war, and every war has come to an end.

With the collapse of the Berlin Wall, a new dawn of democracy took hold abroad, and a decade of peace and prosperity arrived here at home. And for a moment, it seemed the 21st century would be a tranquil time. And then, on September 11, 2001, we were shaken out of complacency. Thousands were taken from us, as clouds of fire and metal and ash descended upon a sun-filled morning. This was a different kind of war. No armies came to our shores, and our military was not the principal target. Instead, a group of terrorists came to kill as many civilians as they could.

And so our nation went to war. We have now been at war for well over a decade. I won’t review the full history. What is clear is that we quickly drove al Qaeda out of Afghanistan, but then shifted our focus and began a new war in Iraq. And this carried significant consequences for our fight against al Qaeda, our standing in the world, and -- to this day -- our interests in a vital region.

Meanwhile, we strengthened our defenses -- hardening targets, tightening transportation security, giving law enforcement new tools to prevent terror. Most of these changes were sound. Some caused inconvenience. But some, like expanded surveillance, raised difficult questions about the balance that we strike between our interests in security and our values of privacy. And in some cases, I believe we compromised our basic values -- by using torture to interrogate our enemies, and detaining individuals in a way that ran counter to the rule of law.

So after I took office, we stepped up the war against al Qaeda but we also sought to change its course. We relentlessly targeted al Qaeda’s leadership. We ended the war in Iraq, and brought nearly 150,000 troops home. We pursued a new strategy in Afghanistan, and increased our training of Afghan forces. We unequivocally banned torture, affirmed our commitment to civilian courts, worked to align our policies with the rule of law, and expanded our consultations with Congress. 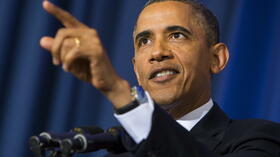 Today, Osama bin Laden is dead, and so are most of his top lieutenants. There have been no large-scale attacks on the United States, and our homeland is more secure. Fewer of our troops are in harm’s way, and over the next 19 months they will continue to come home. Our alliances are strong, and so is our standing in the world. In sum, we are safer because of our efforts.

Now, make no mistake, our nation is still threatened by terrorists. From Benghazi to Boston, we have been tragically reminded of that truth. But we have to recognize that the threat has shifted and evolved from the one that came to our shores on 9/11. With a decade of experience now to draw from, this is the moment to ask ourselves hard questions -- about the nature of today’s threats and how we should confront them.

And these questions matter to every American.